You can watch recordings of some of our previous events below.

Merchants: The Community That Shaped England's Trade and Empire, 1550-1650

Hosted by the Centre’s director, Dr Alexia Yates, the launch celebrated Dr Smith’s book, which presents a new history of English trade and empire – revealing how a tightly woven and professionally distinct community of merchants sat at the heart of globalising Britain. Prof Drayton described Merchants as “a cultural and social history of economic life, focused on a key moment in English, British global and economic history. A moment defined by the origins of the modern state… the origins of the British empire [and] the evolution of capitalism”.

In his comments, Dr Gallagher remarked that Merchants is “a wonderful book”, and “really exciting”, highlighting that something “that’s always appealed to [him] about this work, is its commitment to bringing the approaches of cultural and social history, as well as the quantitative, to histories of commerce, capitalism and English expansion”. He was hopeful that this approach could serve as a bridge between social and economic history and histories of education, with the potential for generating new interdisciplinary conversations. Gallagher further noted that he “particularly enjoyed that this is a global history, but it is also a history of London at a crucial point in the history of the city”, in which “spaces and sociability” and the “sensory and spatial experiences of the city” animated early modern commerce.

Speaking next, Prof Antunes emphasised that “it is very valuable that [Smith has] placed merchants in the centre of [his] research instead of the state or the employer, or of a specific company”. In doing so, Antunes suggested, that what Smith “also demonstrated, and I think very eloquently, is that these networks were not built around only historical coincidence. These people sought each other out, they knew what they were doing, not that they had a master plan to conquer the world, but it was clear they had social and economic strategies that gave them control over information and circulation of ideas and also have understanding of risks”. The implications, Antunes proposed, could include bringing together often distinct ideas about English and European commercial culture and capitalist development into more fruitful comparison.

Finally, in the launch’s concluding comments, Prof Drayton commended Merchants for its scholarly merit and “masterful” writing. He remarked “it reminds me of Paul Langford’s portrait of capitalism and society in the eighteenth century, or if I’m recklessly flattering, to Keith Thomas’s Religion and the Decline of Magic”. Recognising the book’s granular, archivally driven analysis of mercantile community, Drayton suggested it could serve as a useful foundation for further developing ideas about the role between the state, colonisation and economic development, and understanding longer term trajectories of commercial change that would tie England’s experience more closely to that of Europe. Drayton finished by noting the value that Merchants will have for the historical community – “it is a wonderful, extraordinarily rich, and very scholarly book which I think will be a treasure house for essentially anyone working in early modern economic, social and even political history”.

One World or Two Worlds? Defining Britain's place in the world economy after Bretton Woods

A seminar with Martin Daunton of the University of Cambridge. 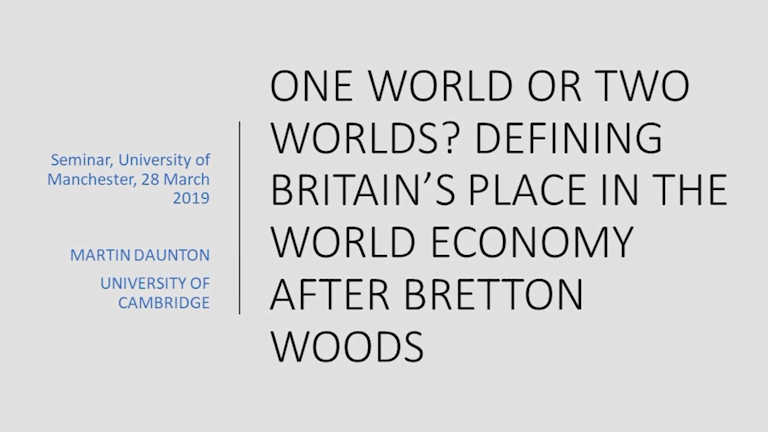